Cycling has become a popular activity on Hainan. Both Chinese and foreigners enjoy exploring Hainan by bike. Maybe you just want to cycle a few kilometers in the afternoon, or perhaps your planning a trip to cycle around Hainan Island. Either way this section contains some useful information.

Hainan is well suited to bicycle trips, especially if you enjoy rural landscapes and natural beauty. Away from the heavy industry of mainland China, Hainan has a pleasant environment for cycling. Hainan offers beaches, mountains, jungle, coconut plantations, waterfalls, minority villages, and a couple of cities for exploring.

Bring your own bike to Hainan or rent one from a bicycle shop in Haikou or the Banana Hostel. Haikou has a fairly good bike shops where you can rent good quality bicycles for reasonable prices. Alternatively, you could buy a decent bike for around 2000 RMB.

The Haikou Banana Hostel has several mountain bikes that are suitable for cycling around Haikou City. Guests can use them for free, but they can only be used within the city and surrounding area.

If you want to cycle around Hainan island we suggest that you rent a bike from Giant bike rental store, because you can return the bike in Sanya and it is professionally serviced.

The nearest bike shop to Banana Hostel is:

We can help you contact the store when you arrive.

You can find a list of all the Giant bike shops in Hainan on their website: http://www.giant.com.cn.

There are many possible cycle routes. A shorter cycle trip would be from Haikou to the coconut plantations of DongJiao near Wenchang (distance 100 km one way). Another route would be Haikou to Sanya through the centre of Hainan (250 km). The central road is in good condition and passes through beautiful rural landscapes and mountains. Venture off the central road and find waterfalls and minority villages. Arrive at the beaches in Sanya. A popular cycle plan is Haikou to Sanya down the central route and back to Haikou along the east coast (or vice versa). If you get tired and decide you just want to cycle one way then you can take your bike on the High-speed train back to Haikou.

The following section gives the elevations and distances of some of the major roads in Hainan which should be useful for cyclists and perhaps bikers too.

The graph below shows the central highway is fairly mountainous. The biggest incline/decline is just north of Wuzhishan Town. Maximum elevation is just over 900m and the total length is 280km. 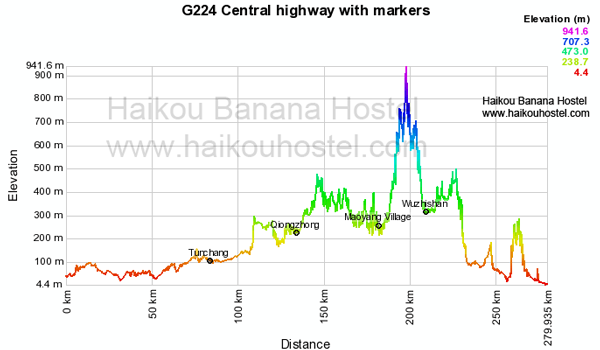 To get to Wuzhishan Mountain you need to exit the central highway and take the road to Shuiman Village. There are 2 possible routes: take the turn at Maoyang Village, or the turn off just south of Wuzhishan town. Either way it is approximately 30km to Shuiman. The elevation graph below shows the road to Shuiman has some significant inclines/declines. 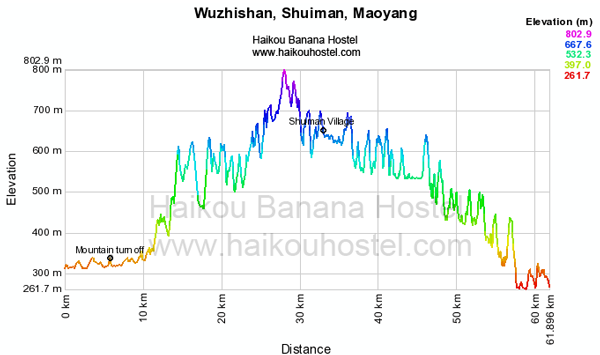 Note: Hainan has both an Eastern Highway (the G223) and an Eastern Expressway. The highway is older and the road surface is not always good. The expressway is newer and more direct, but not for cyclists, it is basically a high speed motorway. The graph below shows that Hainan’s eastern highway is mainly flat and about 300km long. 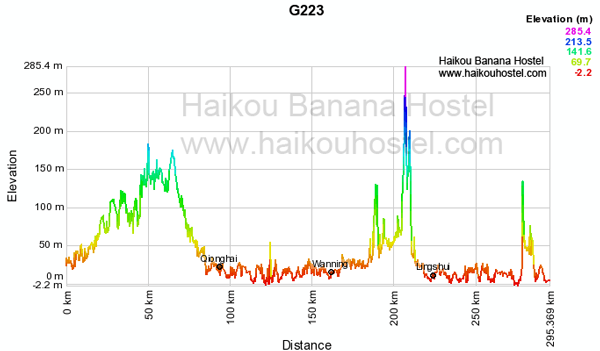 Again, Hainan has both an western highway (G225) and a western expressway. The expressway is a motorway and not for cyclists. This graph shows the western route is also quite flat, but is the longest, at around 400km. 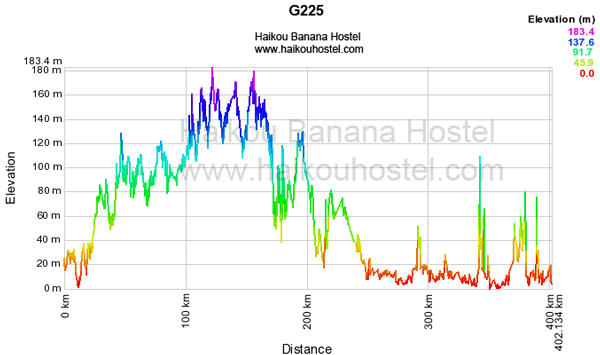 Here is a bike trip report from a guest at Haikou Banana Hostel. They took the G223 (old eastern highway) from Haikou to Sanya in Sept 2011.

I just did this ride with my girlfriend. Buy a map of the island (only in Chinese but you can copy English names onto it from the map at the front desk). Xinhua Bookstore sells the maps. We followed the G223 all the way to Sanya. If is well marked and it has kilometer markers and tenth of a kilometer markers. Only in the cities does it get confusing. We did the ride in 3 days although I’d recommend 4days. In total it is about 330-350K based on where you start + end.

Route: Head to the East Train Station, go just beyond it and at the “T” go left and you are on the G223.

Day 1: Once on the G223 follow it with a bike lane out of town through several small towns on smooth roads for 115K to the town of Qionghai. There is a nice cheap hotel on the right on the main street.

Day 2: Follow the main road out of town and look for the G223 sighs to let you know you are on the track. Bike about 60K and relax in Wanning after a short day.

Day 3: Wanning to Lingshui: you encounter the first mountain pass at 50K not too long or steep. Lots of cheap hotels everywhere, cheap food too.

Day 4: Lingshui to Sanya is around 70K with one pass around 50K and a big downhill into Sanya 40 of the 70K, the road is in bad condition, it will be slow and dusty.

Summary: Follow the G223; water + food are plentful along the way as you pass a lot of towns. Bring a big shade hat + sun scream — there’s not much shade.

Bike can be taken on the train for the return!

NOTE: We have had feedback back from cyclists who warn that bikes must have their wheels taken off before being allowed on the train.

Here are suggestions for cycle trips in and around Haikou.

Haikou’s old town centre is about 1km south of the hostel. To get there head south down Renmin Road and cross the bridge. It can be fun cycling through the small decaying alleys and getting lost in he process. You can find many small real temples. If you’re lucky maybe there will be some kind festival at a temple. The area is being renovated. This is an easy ride except for the bustling bikes and people to steer around!

This route will take you to Holiday beach. Take a left at the Clock Tower and follow the new cycle path along Haidian river, under century bridge, and past the iconic Wormhole library. Continue on to Evergreen park. Keep following Binhai Road as it becomes a coastal road, leading to the beaches in the west of Haikou.

You can also take a detour into Changming Village and Wuyuan River Park.

There is a canal that runs through the east of Haikou. Along the canal is a path suitable for cycling. This is an easy way to see some of the city while avoiding motorised traffic. The canal leads to Wugong Temple. You can come back to the hostel along the Nandu river to complete the loop.

The Longhua area is an old volcanic area (there are no active volcanoes). The area has abundant amounts of volcanic rock just beneath the top-soil. As a result, you can find many rock cutting factories, quarries, and some small ancient lava rock villages. The roads are generally small concrete or tarmac affairs interconnecting the small farming villages. Most of the area is tropical countryside. Traffic is sparse apart from around the new Mission Hills Golf Resort where there is construction and big trucks moving lava rock. The altitude is roughly sea level and largely flat.

The map below shows the Longhua District cycling area (the red square) in relation to Haikou city. The cycling area is south of Haikou city, inbetween the central highway and the eastern expressway. Paths suitable for cycling begin on the southern side of Yehai Avenue (椰海大道), which is basically the edge of the built up city.